Tower of Secrets by Victor Sheymov 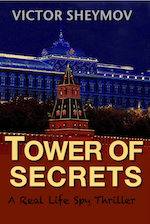 “Tower of Secrets Is a thriller, filled with spycraft and intelligence techniques never before revealed, a true story that is more spellbinding than any work of fiction could ever be.”
Victor Sheymov: ace troubleshooter for the KGB’s super-secret Eighth Chief Directorate, operating out of the infamous Lubyanka Moscow Center.
Head of security for cipher communications worldwide, he has rare knowledge of the entire system. A star player, headed for the top, his contacts range from Party elite to the dissident community and the Moscow underworld.
Until shattering events force a decision. With his wife and five-year-old daughter, Sheymov will defect. First, he must find a way to make secret contact with the Americans. Then he must beat the overwhelming odds against getting out of Russia. But the thorniest challenge is to keep the defection secret for a decade and allow the U.S. To use Sheymov’s stunning expertise. A coup for the West, catastrophe for the KGB, Sheymov is ready to unlock a..Tower of Secrets.

Previous Next Return to BOOKS